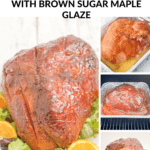 This Double Smoked Ham Recipe makes the perfect ham, complete with a sweet and sticky brown sugar maple glaze. It is out of this world delicious and perfect for any occasion, any time of year. Impress your guests with this succulent sweet and savory smoked ham; everyone will be wondering how you created such a masterpiece! The beautiful glaze is so enticing; you'll want to eat it by the spoonful!

PIN the recipe to try it later!

This double smoked ham is one of the best things I have ever made in my life....it is SO good!

There are just so many amazing things about this ham. It is easy to make, is perfect for Christmas, Easter, or anytime, even a summer BBQ. The glaze is so good you could eat it with a spoon. (I did that, and I am not ashamed).

You don't need to buy expensive hams to get the perfect ham. Just a kiss of additional smoke is all you need.

Another great pellet grill recipe is Smoked Turkey, a fantastic recipe that you should try.

This smoked ham will be the star of any holiday meal, served alongside Oven-Roasted Potatoes, roast buttercup squash, Carrot Salad, and topped off with Smoked Pumpkin Pie or Easter Egg Cheesecake. Check out more holiday recipes here.

What is double smoked ham?

When you purchase a ham, it is already pre-cured and smoked. It is thus "double smoked" by cooking it on the smoker. It is also known as "twice-smoked" ham.

Double smoking the ham gives it a nice smoked flavor, not overpowering in the slightest. I was expecting a robust smoke flavor, but that wasn't the case.

The ham is cooked on low heat, so the moisture level increases. In addition, the ham has a delicious crusty exterior covered with a sweet glaze. In my opinion, this is the BEST way to cook a ham.

What are the best wood pellets to smoke ham?

Maple, apple, hickory, and cherry wood are the best wood pellets to smoke ham. Some people like fruit wood the best.

The Competitions Blend has a mixture of maple, hickory, and cherry, also a good blend.

Why a pellet grill?

We had heard fantastic reviews about wood pellet grills for the past couple of years, but we didn't think it was worth the added expense. We already had a natural gas BBQ; why buy something else that would do the same thing?

We purchased a Pit Boss 8-1 grill that uses 100% wood pellets as fuel instead of gas and propane.

From the first time we used it, we loved it! It added so much flavor and was so easy to use! The best part was that it was electric, you just set your temperature dial, and that's where the temperature stayed. It was so cool! (BTW, this is not a sponsored post; we loved it that much.)

You can make a smoked ham on any grill, a pellet grill, gas grill, Big Green Egg, or charcoal grill. This smoker recipe for how to cook a ham on a pellet grill is my favorite recipe that always turns out 100% of the time 🙂

How long to cook twice smoked ham on pellet grill?

I like to smoke a ham low and slow for optimal juiciness. At a temperature of 225 degrees F, the cook time will be about 3-4 hours to cook, depending on the size of your ham, if it has a bone, and how hot your smoker is. It takes about 20-30 minutes per pound to cook a smoked ham.

If you are cooking a half ham, you will reduce the time. So use an instant read thermometer to know when it is cooked.

How much ham do I need per person?

I prefer a bone-in ham ALL the time. The bone gives the meat so much more flavor. The boneless is easier to cut, but the bone-in will have SO much flavor.

Why you will LOVE this twice-smoked ham

EASY: The whole smoking process is so easy. It is almost hands-off cooking. No turning or flipping is required, just glazing near the end of the cooking time. The entire process is so easy and will give you time to visit with your guests. You can even kick back and enjoy a glass of your favorite chardonnay. 🙂

DELICIOUS: The delicate smoke flavor is infused in each incredibly tender bite of ham. Double smoking the ham is a great way to get great flavor into the meat, and it takes the flavor of ham to the next level!

SUPER MOIST: I am not kidding when I tell you the ham is MOIST! It was SO juicy and tender when I took my first bite, OMG! So good!!

FREE OVEN: Your oven is free to cook other dishes.

FANTASTIC GLAZE: This glaze recipe is so tasty, make sure to reserve some to spoon on the ham when you serve it. I was eating it with a spoon!

You can prepare this delicious, juicy, flavorful smoked ham recipe with basic ingredients you can find at any grocery store.

For the Sweet Glaze:

See the recipe card for quantities.

How to cook double smoked ham on the pellet grill

Preheat your smoker. Set the temperature to 225 degrees F. Make sure you top up the pellet grill with wood pellets.

First thing, remove your ham from the package. Next, rinse the ham with cold water and dry the ham with a paper towel.

If your ham is not spiral-cut, score the outside of the ham, which helps the rub and glaze sink into the meat. First off, score the ham with a sharp knife, and cut long cuts from the top of the ham down to the bottom. Next, make a second set of perpendicular cuts to form a diamond pattern all over the outside, about ½-inch deep, 1-½-inches apart.

Next, place the whole ham cut side down in an aluminum roasting pan or sturdy heavy-duty pan. Coat the outside of the ham with olive oil

If using a homemade dry spice rub, mix the ingredients in a bowl with a spoon.

Cover all sides of the ham with the spice rub. Do not worry about doing the bottom (cut side down) of the ham.

Next, add the orange juice to the aluminum pan around the ham.

Place the foil pan with the ham into the preheated grill when it comes up to the correct temperature, directly onto the cooking grid.

Close the lid and smoke the ham, uncovered, for about 2 hours, until the meat reaches an internal temperature of 130 degrees F to 135 degrees F.

When the ham is near the correct internal temperature, prepare the glaze. Combine all glaze ingredients in a small saucepan over medium heat, stirring occasionally. Bring the mixture to a boil and immediately shut off the heat. Reserve ½ to ¾ cup of glaze for serving with the ham. Set aside.

Once the ham has reached an internal temperature of 140 degrees F on the digital instant-read meat thermometer, it should be nice and caramelized. Remove the ham from the smoker, tent it with aluminum foil, and let it rest for 10 minutes.

Spoon the reserved glaze over the ham for a stunning presentation before you slice it and serve.

Change the flavor of the ham by changing the spice rub ingredients. So go ahead, have some fun with it!

Note: Sugar will turn a dark color on the ham as it cooks. If you don't want a dark color, leave the sugar out.

Smoker: Our smoker is an electric smoker, a Pit Boss smoker 8-1 grill that uses 100% wood pellets as fuel instead of gas or propane.

Wood pellets: We like the Competition Blend, Hickory Blend, and Applewood Blend.

High-quality temperature probe: This is a must-have item if you own a smoker. We invested in this ThermoPro Wireless Digital Cooking Food Meat Thermometer with Dual Probes as soon as we bought the smoker; it's an absolute necessity!

Fridge: Leftover smoked ham can be kept in the refrigerator in an airtight container for up to 3 days.

Freezer: Leftover smoked ham can be frozen for up to 3 months in an airtight container or Ziploc bag. We love using a Foodsaver to freeze our food; it keeps longer!

If you have lots of leftovers, slice up the ham and place it in a Ziploc bag, and pop it in the freezer for meal prep for school or work lunches.

What temp do you smoke a ham on a pellet grill?

The cooking temperature for smoking a ham on a pellet grill is 225 degrees F until it reaches an internal temperature of 140 degrees F.

What is the difference between smoked and double smoked ham?

Of all the meats out there, a double-smoked ham is in a league of its own. It delivers a unique smoky flavor that you cannot find anywhere else. Some people liken the two kinds of smoked hams to different flavors. You have got to try it!

What is a good side dish to serve with double smoked ham?

What to serve with leftover double-smoked ham?

If you are lucky enough to have leftover ham, use it for breakfast the next day in Oven-Baked Omelet Casserole, an easy recipe that feeds a crowd.

Leftover double smoked ham is excellent in Instant Pot Ham and Potato Soup, Spinach And Mushroom Omelet, or breakfast sandwiches served with fried eggs on my popular Air Buns the next day.

A double smoked ham is a must-have during the holidays. Whether hosting a Christmas party or just a family gathering, this dish will be a hit!

I hope you enjoyed this Double Smoked Ham Recipe with Brown Sugar Maple Glaze. If you try it out and like it, I would appreciate it if you could take a moment to leave a star rating below. Also, please leave a comment below saying how much you enjoyed it and what other types of recipes/ingredients would be interesting for me to write about in the future. 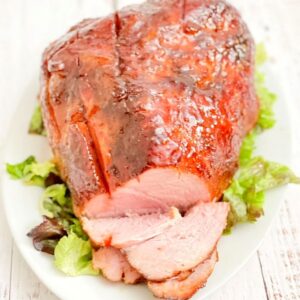 Nutritional information is approximate and is meant as a guideline only. Homemade BBQ rub recipe Storage: Fridge: Leftover smoked ham can be kept in the fridge in an airtight container for up to 3 days. Freezer: Leftover smoked ham can be frozen for up to 3 months in an airtight container or Ziploc bag.  If you have lots of leftovers, slice up the ham and place it in a Ziploc bag, and pop it in the freezer for meal prep for school or work lunches.

I'm a busy mom who loves to cook but doesn't have time to spend hours in the kitchen. My goal is to help you make tasty meals quickly so that you can spend more time on what matters most-- family!